We don’t often give to a book a review article rather than a review, but this book is important, it has generated a significant amount of debate, it will prove to be significant, and it raises interesting questions which are well worth pursuing.

The authors are epidemiologists and they bring research tools normally applied to the study of how and why diseases spread in populations to the study of a broader range of social ills. The book is packed full of useful and interesting data. It would have contained more of it if more had been available, but the authors found that data on hierarchies of wealth and on educational attainment are less available for the whole range of countries they were studying than is data on income inequality (p.27), so income inequality comes to stand for inequality in general.

Richard Layard has shown in his book Happiness (2006) that as GDP rises happiness rises and then plateaus; and in this book Wilkinson and Pickett show that the same applies to life expectancy, health, and other social indicators. But whereas between wealthier societies average income makes little difference to the levels of social indicators, within societies a very different picture emerges: ‘Richer people tend, on average, to be healthier and happier than poorer people in the same society’ (p.13). The researchers’ main finding is that levels of income inequality and levels of social and health problems correlate very closely with each other (p.20), and they draw the conclusion that inequality causes a variety of social failings.

But this isn’t just an exploratory work: it is a call to action. The authors have themselves set up a not-for-profit trust to disseminate their findings, deliver understanding of the connections that they have discovered, and promote action to reduce the inequality which they believe to be the root cause of social ills. The final part of the book is full of proposals for action: the kind of childcare we are now seeing in the Sure Start programme; employee ownership of companies; reductions in CEO pay; and changing tax and benefits policies ( – there ought to have been rather more on this because the authors themselves recognise that it is ‘the most obvious way’ to influence income differences (p.263)). A Citizen’s Income gets a brief mention.

The importance of this book is that no longer will anybody be able to say the income inequality doesn’t matter.

And so the questions which the book raises:

A particularly interesting question is that of causality. Many of the chapters contain discussions on how inequality and/or income inequality cause the levels of health and other social indicators: levels of trust, mental illness, life expectancy, infant mortality, obesity, educational performance, teenage pregnancy, murder rates, imprisonment rates and social mobility. The authors take income equality as a signal of a more general social inequality, and then treat that as the causal factor.

As David Hume suggests: ‘When we look about us towards external objects, and consider the operation of causes, we are never able, in a single instance, to discover any power or necessary connexion; any quality, which binds the effects to the cause, and renders the one an infallible consequence of the other. We only find, that the one does actually, in fact, follow the other,’ (Hume 2008, ch.1, § iv). Owens 1992 and Sosa and Tooley 1993 are more recent treatments of the problematic notion of causality, and they, like Hume and the book under review (p.62), raise the question as to whether a coincidence of phenomena can ever lead to a proper conclusion that one action causes the other. They also raise the question as to whether we can even say what we mean by the word ’cause’.

I shall continue to employ the notion of cause in this article whilst recognising that we can’t be sure what the term means or whether causality is operating between inequality and social ills – because, as Immanuel Kant suggests, without the notion of causality we find it impossible to reason about anything.

Unfortunately the notion of proof is just as difficult as the idea of causality. Karl Popper (2002) suggests that science comprises a set of bold hypotheses which we can falsify but which we cannot prove. What we can do is seek evidence which supports a hypothesis and thus construct a cumulative argument. Thomas Kuhn (1970) shows how a paradigm shift occurs and coheres within scientific communities and thus forms the basis for further exploration. The book under review is a useful step along the way towards understanding how our society functions, and thus helps to build the foundations for a new paradigm. Further research on the different kinds of inequality (educational attainment, housing, social capital, income, power, relationships with powerful people, etc.) and on how they relate to each other, and also research on the extent to which a generalised ‘inequality’ exists and relates to particular kinds of equality, will help to build such a new paradigm and provide an even firmer basis for further useful research.

The general inequality to which the particular inequalities belong, and with which the levels of social ills correlate, might in former times have been spoken of in terms of social class. This raises the issue as to whether underlying the different kinds of inequality is a fundamental social hierarchy. Here is another issue deserving further research. If there is such a social hierarchy then it might be that hierarchy which is the independent variable, and income inequality and other particular inequalities which are dependent variables alongside the social ills which the authors find to be related to them.

The authors have offered us a hypothesis: that income inequality causes social ills. I would like to take the argument one step further and offer an additional hypothesis: that a deep-seated social structure (which we might call a social class structure, but we shall need to revisit the meaning of that term if we are going to use it) is a causal factor in constructing social infrastructures (of education, income distribution, healthcare, community engagement, etc.) and that those infrastructures result in inequalities which correlate closely with each other. 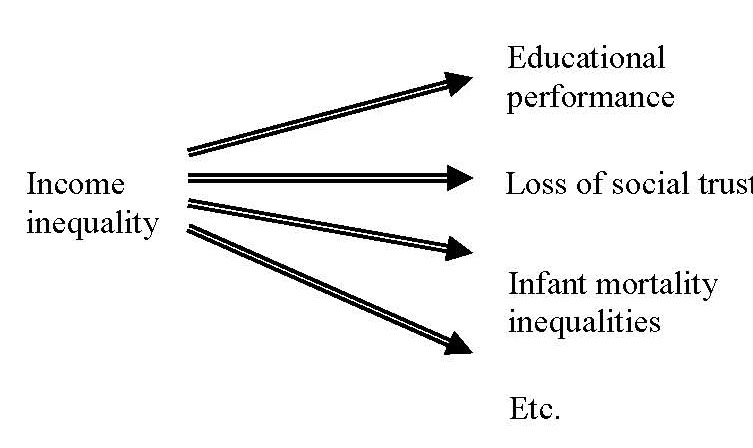 To offer an additional hypothesis brings with it an obligation to find supporting evidence (evidence which supports it, not evidence which proves it). Esping-Andersen categorises ‘welfare regimes’ thus:

The close correlation suggests that the structure of welfare provision causes income inequality. If the class structure of a society relates closely to the type of welfare regime then Esping-Andersen’s categorisation supports the first line of the table representing the additional hypothesis. This suggests that income inequality is a dependent variable, and that the additional hypothesis might offer a useful description of causal links.

I suspect that underlying different income inequality outcomes is the extent to which Esping-Andersen’s regimes apply different rules to different groups within a society. Here the detail matters. The Department for Work and Pensions Tax Benefit Model Tables  show that many households on low incomes experience marginal deduction rates of 95%, i.e., for every additional pound they earn they keep only 5p: whereas those who earn most keep 59p of every extra pound earned. Income inequality is bound to be the result. Thus in a liberal welfare regime which relies heavily on means-testing the structure results in increasing income inequality. It is such detailed consideration of the structures of welfare provision (for instance, of the different types of secondary school, their different admissions systems, and those systems’ privileging of middle class behaviour) that might reveal the complex causal pathways which result in a correlation between income inequality and other social indicators.

At the end of ch.6 Japan and Russia are compared. The former has high income equality and good health indicators, the latter high income inequality and poor health indicators. The detail of the two examples suggests that a bundle of factors relating to economic and legal structures, history, and politics, might be the independent variables behind both income inequality and health outcomes, as the additional hypothesis suggests. Similarly, the evidence adduced for a statement on pp.168-9 that income inequality leads to lower social mobility suggests that it’s feeling comfortable amongst people like ourselves which improves health and social outcomes, and when discussing educational performance the authors find that parents’ educational attainments affect both household income and one’s children’s educational attainments. In a number of places the authors show how chemical factors (for instance, cortisol release when we are stressed, inhibiting our ability to think) affect social and health indicators. Such evident complexity supports the existence of the left hand column in the diagram of the additional hypothesis. There is a social hierarchy with complex roots; it is this which in different ways drives the structures of welfare provision; it is these structures which determine income inequality and other health and social indicators; and these inequalities in their turn reinforce the social hierarchy, thus creating a circular model, as shown in the diagram below:

The authors’ own discussion of possible causal routes on pp.188ff could lead us to the additional hypothesis outlined above, and it could also provide additional support for their listing of Citizen’s Income amongst the actions for which they call. A Citizen’s Income would redistribute income, and would thus be an action related to the authors’ hypothesis; but it would also reduce marginal deduction rates and thus encourage low earners to earn more by enabling them to keep more of the additional money they would earn. It would therefore change for the better the structure of welfare provision, as the additional hypothesis requires.

In every social policy area, changing the structure of provision will change outcomes. For instance: to remove private schools’ charitable status would reduce the numbers going to them, which would bring more bright middle-class children and their parents into the state system, which would improve state schooling, which would affect educational outcomes. To cease to allow voluntary aided schools to set their own admissions criteria would have a similar effect.

In the field in which we are most interested here, we need policy changes which will result in alteration to the structure of welfare provision as this would change the ways in which the system redistributes income. The one prescription would therefore satisfy the ways in which both of our hypotheses call for action. In this instance, changing only the symptom might make matters worse if additional means-testing is used to redistribute income, for that would only increase marginal deduction rates (as more benefits would be withdrawn as earned income rose) and would thus dig people deeper into poverty. In this, as in all other policy areas, it’s the structure which requires attention as well as the symptom.

Wilkinson and Pickett are to be highly congratulated on a book which has started an essential debate; and the publisher is to be congratulated on the book’s production (though the index is incomplete, there is no bibliography, and the cartoons are a matter of taste).

This review is a contribution to the debate which now needs to happen. We look forward to seeing many more contributions to it. As the authors say, ‘in the course of our research we became aware that almost all problems which are more common at the bottom of the social ladder are more common in more unequal societies’ (p.18). Yes, indeed. So what needs changing is the length of the ‘social ladder’. The more equalities we can introduce into our social infrastructure, the more the ladder will shorten, particularly for the next generation. Whilst a Citizen’s Income on its own wouldn’t complete that task, it would surely make a substantial contribution to it.

The authors have shown that there is a significant correlation between income inequality and various health and other social indicators. What we now require is a broad debate about a) what the causal links might be; and b) what we should therefore do.