These proposals have been criticised on the basis that Working Tax Credits include a Childcare Element to subsidise childcare costs (registered nursery or child minder), which are supposed to be targeted at lower earners.

This article addresses those concerns (the Childcare Element of working tax credits is only four per cent of total Tax Credit payments[1], and only one-quarter of total government subsidies for childcare costs) and looks at how these overlapping subsidies could be merged into a single simplified and harmonised system.

First let us look at the bigger picture.

How many children are affected?

According to the population pyramid, there are nearly 800,000 children in each year cohort 0 up to 5[2].

The cost of children in a reception class forms part of the education budget and is largely outside the scope of this article, which focuses on the 1,451,000 receiving ‘paid for’ childcare.

Table 4: The number of children eligible to claim in each category

This compares with 2,000,000 children from Table 1. The bulk of the overlapping claims relate to Free Early Education.

The simple average planned cost/value per child is the total annual cost of £6.4 billion from Table 3 divided by 1,451,000 children in ‘paid for’ childcare from Table 1, which is £85 per child per week.

As mentioned, there are many children for whom parents claim Free Early Education as well as one of the other subsidies. The three main other subsidies are largely mutually exclusive. This can be represented as a flowchart: 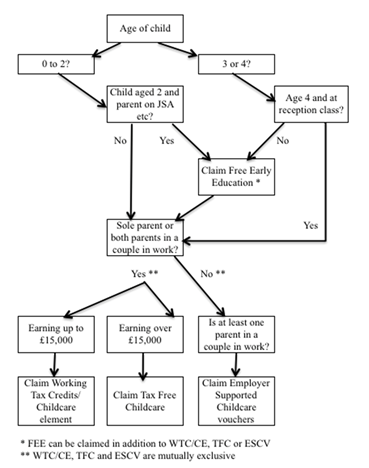 Please note: the figure of £15,000 for household earnings is very approximate. The exact cut-off point for any individual household will depend on that household’s composition and parents’ working hours.

This is a non-means tested, non-contributory, non-taxable and largely non-conditional benefit. It has the largest caseload and the highest cost. It has been criticised for simply pushing up childcare costs because of barriers to entry, meaning that childcare providers simply charge higher fees[8], but this can be said of all such schemes apart from a free place in a reception class at a state primary school.

In practice what happens is that local council pays registered providers a total of £3,129 per child per year, which the provider deducts from their charges. Where the hourly rate is less than £5.49, the provider simply credits the surplus against the charge for hours in excess of 15 per week. Where the hourly rate is more than £5.49, the parent has to pay the difference.

This is a conditional benefit[9].

A two-year-old will be eligible for the same funding (15 hours @ £5.49 per week for 39 weeks a year) if their parent(s) claims any one of the following:

The average cost/value per child per week is £28 as explained below.

The official upper limits of £175 for a household with one child or £300 for two or more children are nigh meaningless. The eligible amount for which a parent can claim is actual nursery costs minus Free Early Education payments minus Employer Supported Childcare vouchers multiplied by 70%. The actual claim is then abated by 41p for every £1 of gross wages over the threshold of £6,420.

Official statistics show that 93% of household claims are for total weekly costs of £160 or less and the official average amount paid out is £29 per child[11].

Table 5: Typical eligible amount: single parent with both children in full time childcare @ £180 per week for 48 weeks a year

The average cost/value per child per week is £19.

Under a scheme introduced circa 2003, any employee could receive vouchers with a face value of £55 per week (regardless of the number of children) tax free by waiving £55 taxable salary (a salary sacrifice). The employee’s gross pay goes down by £55 per week, saving £18 per week in PAYE (income tax and Employee’s NIC at 32%).

This benefit is conditional on being in work and since 2011 is quasi-means tested. Parents/employees paying higher or top-rate tax had their allowance adjusted so all taxpayers have roughly the same maximum tax saving. The limits are:

The scheme has been modified several times since inception and was closed to new entrants since the introduction of Tax Free Childcare in Autumn 2015.

To qualify, a single parent or both parents in a couple have to be in work, earning just over an average of £100 each a week and not more than £100,000 each per year[14]. Tax Free Childcare cannot be claimed if the household is also claiming Working Tax Credits. Vouchers with a face value of up to £10,000 per child can be acquired for 80% of the face value and used to pay for childcare costs.

The maximum saving per child per week is £38. In most cases this will be a larger saving than the superseded scheme Employer Supported Childcare vouchers, unless only one parent in a couple is in work (saving £930 a year as against nothing) or a couple are both in work, pay basic rate tax and pay less than £194 per week (net of Early Years Funding) for childcare for one child.

Around two-thirds of 4 year olds are in reception class at a state primary for free. I assume that the other one-third do not attend because there is no reception place available for them or because their working parents require care until later in the afternoon/evening and send them to a nursery or child minder for which they claim the Free Early Education payments.

The value of Free Early Education vouchers is £60 per child per week.

The cost/value of the three mutually exclusive schemes in the bottom row of the flowchart per child per week is as follows:

So the average total claim per child per week is between £79 and £98.

Would it not make sense to harmonise the rates and increase the Free Early Education vouchers to £85 per week x 48 weeks a year for all 2, 3 and 4 years olds?

The total number of children in ‘paid for’ childcare is 1,451,000 (from Table 1). If each receives £85 per week in vouchers for 48 weeks a year, the total cost/value would be £5.9 billion. This represents a saving of £0.5 billion over the £6.4 billion expenditure forecast the House of Lords Select Committee from Table 3.

Winners will not just be those who would receive more per child per week, but all parents whose lives have been made much simpler and can now plan ahead and budget more sensibly.

Clearly, some would receive less in benefits than under the current schemes:

A slightly more radical proposal would be to spend the £6.4 billion on providing nursery classes at state primary schools for children aged 2 to 4. This will take time to implement but simplifies things for parents and does not have the unintended consequence of pushing up childcare costs.

[6] Total from House of Lords Select Committee, individual items adjusted for other sources to reconcile with their sub-totals.