1. Do benefits really shape work incentives in the long term?

If anyone imagined that an experiment offering two years of Basic Income would resolve arguments about work incentives, they haven’t been paying attention.  In the first place, Basic Income is designed to be neutral as to whether or not people work.  In the second place, previous income experiments have generally shown incentive effects to be feeble (and the economists who are convinced there have to be such effects have had to work hard to isolate them).

There’s a more substantial problem.  We know, from the introduction of pensions after 1908, that pensions have materially changed the way that older people engage in the labour market; but we should also recognise that the effects were not straightforward.  This is from work by Paul Johnson (note 1).

In the 1880s almost 75 per cent of men aged 65 and above were in some form of employment. Over the past century retirement has shifted from being an exception to being the norm: by 1951 only 31 per cent of men in this age group were in work, a figure which had fallen to a mere 8 per cent by 1991. This secular decline in labour force participation rates for older men and rise in retirement is in part a consequence of increasing public provision of income in old age, but it has a more complex history. Most of the fall in participation rates between 1881 and 1921 was a result of sectoral shifts in the economy. … In the interwar period, however, there was an unambiguous decline in participation rates for men over 65, irrespective of changes in the sectoral composition of the workforce. ln theory this could have been a result of the payment of insurance-based pensions from 1928 to manual workers aged 65 and above who had made an appropriate number of National Insurance contributions, though in practice there is no evidence that the 65-9 age group contributed disproportionately to the rising retirement rate in the period. This is perhaps not surprising when the level of the pension is taken into account. … Far from older workers being lured from the labour force by the attraction of high public pensions, they instead appear increasingly to have been forced out by the policy of employers.

The changes in labour market participation took more than seventy years fully to materialise.  These graphs come from a DWP report (note 2). 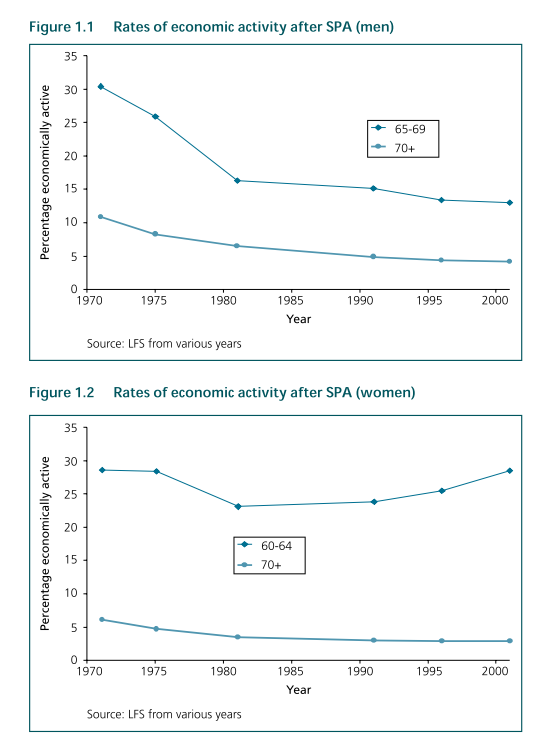 Part of the reason for the higher labour market participation of older workers in 1970 was those some whose contribution records had been interrupted by the war needed to remain in work to make up the gaps. I think it would be reasonable to argue that the decline in labour market participation had largely settled down by 1980 – but that was more than 70 years after the introduction of state pensions in the UK.

What that demonstrates, in economic terms, is that not that labour supply is something that responds directly to economic stimuli, but rather that, over time that the curves are liable to shift, reflecting changing patterns of behaviour, norms, expectations and the economic context.   (Two world wars and a health service might have had something to do with it, too.)

The literature on work incentives is based on the assumption that people will decide whether or not to work on the basis of their current income.  ‘Incentives’ are typically identified in ways that treat any financial return as an incentive, ignoring cost, elasticity or evidence of any actual influence on motivation (note 3).   The development of pensions raises serious doubts about that approach.   If pensions have led people to give up work, they have  done so over a very long period of time.  There is no firm evidence to show that pensions have ever had a clear or incontrovertible incentive effect on labour market participation; there are too many other factors at play.  And if they don’t have such an effect,  there’s not much reason to suppose that other benefits do either.

2. Terminating a Basic Income experiment tells us something, too

The decision to terminate the Basic Income Experiment in Ontario is a sort of finding, too.  The design of related experiments has usually been based on short term economic or behavioural effects – because that, after all, is all one can hope to pick up from an experiment for two or three years.  However, the arguments around Basic Income, on both sides, are about something different – about social and cultural change.   That kind of change can take a generation or more, and it’s simply not going to appear in the way that economists usually model such effects.

The decision in Ontario comes shortly after a (somewhat less brutal) decision in Finland not to extend their experiments.   The message coming over is clear and strong: Basic Income is pushing at the limits of what politicians are prepared to consider.

What does this imply for Basic Income?  First,  politicians won’t leave Basic Income alone – they just can’t stop themselves from tampering.  Look at Child Benefit, which was working really well before the Coalition government decided to create special conditions for wealthy people. If Basic Income comes, it won’t be forever.

Second, there’s no such thing as an unconditional benefit.   Issues which may seem relatively minor now, such as the treatment of migrants, prisoners or religious communities, are going to surface eventually.   Some of the conditions are more liberal, some are less intrusive, but there will be conditions – tax exemptions to “send a message”, rewards for virtue, or whatever.  People advocating for Basic Income have to argue for conditions to be kept to a practical minimum.  That’s hard to do when politicians and the press will convert it into “benefits for paedophiles” or “benefits for members of ISIS”, with specific instances.  Be prepared.

And that leads to the third point: whatever people use their Basic Income for, they’d be unwise to bank their long-term security or future life-plan on it.  I’ve previously drawn the parallel with the introduction of old age pensions.   It’s not possible, more than a hundred years after the introduction of pensions, to be certain what the implications were for older people at the time – but people considering retirement in the 1920s, at a time of major cuts, would have been right to be uncertain.  Most older people were retiring by the 1940s, but many people who were retiring in the 1970s were still deferring their pension claims. How long would it take before the system is so strongly embedded that the future becomes certain?   I can’t be sure, but it’s not going to happen in a three year experiment.

Thank you – useful comment: particularly the point about not being able to evaluate significant social policy change in the short term,

Unfortunately you might be right that if ever a UK or other government established a genuine unconditional Basic Income then ministers wouldn’t be able to resist conditionalizing it. However, there are instances where that hasn’t occurred. The Alaska Permanent Fund dividend remains unconditional, as does the NHS. Child Benefit remains unconditional, alongside the tax on children now suffered by higher rate taxpayers living in households in receipt of Child Benefit, and the unfortunate consequence of Child Benefit claims being withdrawn in such households. This suggests that the future of a genuine Basic Income could go either way. It could either suffer from the imposition of conditions, or we could find it firmly embedded as a popular and secure financial platform on which individuals and households could build.