The Institute for Policy Research at the University of Bath has published a new report,  Basic Income, Automation, and Labour Market Change, by Luke Martinelli 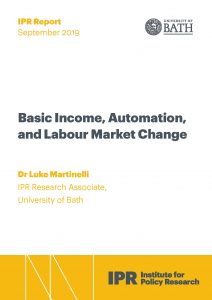 … future trajectories of labour market change – and the roles of different aspects of technological change (automation, robotisation, digitalisation) therein – are highly uncertain. In this context, it is not clear how the case for a basic income will evolve. Apocalyptic scenarios of mass technological unemployment appear to offer the strongest justification. A new institutional framework would be required to cope with demand deficiency, and extreme inequality between capital and labour, that would arise in the presence of exponential growth in the capabilities of robots and AI to replace human labour. Basic income (or something like it) would arguably be an essential part of such a framework, if living standards and basic levels of equality were to be maintained. However, such scenarios are very distant and not certain to transpire; although technological advancement is seemingly relentless, human capacities to reap productivity gains and develop ‘comparative advantages’ in new tasks and activities are also constantly improving. People may continue to favour human labour to carry out certain (interpersonal and creative) tasks, and there may be legal and institutional barriers to the complete replacement of human labour.

Public support for basic income may be an important indicator of political feasibility, but it also has limitations. Asking respondents for their position on abstract welfare preferences is limiting because we do not know the strength of their convictions – if they would be willing to expend political capital or not – or if they are fully aware of the implications and trade-offs involved with their choice. In the case of basic income, of which respondents lack concrete examples, we would expect high level of ‘non-attitudes’ in survey responses. Awareness of trade-offs – specifically, the likely implications for tax rates and cuts to other welfare provisions – inevitably reduces support (Ipsos Mori, 2017).

In any case, considering that over half the population are supportive of basic income in principle, political supply lags behind demand (Chrisp and Martinelli, 2019). It appears that political parties – or those which are serious contenders to take power, at least – take issues of implementation and affordability even more seriously than do the general public in decisions regarding concrete proposals for welfare reform. Here, the trade-offs analysed in section 5 come to the fore.

Ultimately, feasibility depends upon the priority afforded to different goals: the levels of expenditure – and the associated tax burdens – deemed acceptable to attain given improvements in rates of poverty and inequality. Feasibility also depends upon the level and structure of existing provisions, how effectively they tackle poverty and reduce inequality, and the extent to which their adjustment or elimination translates into household losses for specific groups, such as low-income households, pensioners, and unemployed and disabled people. In the context of ongoing labour market change, and if the labour share of value is subject to long-term decline, it is difficult to see how countries that undergo the most profound and widespread risks will be able to afford a basic income, even as they tend to have the highest levels of support for one. Indeed, the uneven nature of technological change suggests that capacities to raise revenue may be diminished in precisely the countries and regions in which the need to adjust to new forms of labour market dysfunction will be most profound.

Generous basic incomes require rather large tax increases and/or cuts to existing expenditure. In either case, powerful constituencies would oppose reforms. This is not to suggest that basic income is not feasible in any of these contexts. A modest, partial basic income is the most realistic option, perhaps as a stepping stone to a more generous full basic income, as most progressive advocates accept (Van Parijs, 2018). Given that basic income is motivated in part by a desire to drastically streamline the benefits system, such schemes may exhibit relatively favourable combined fiscal and distributional outcomes but fall short of achieving some of basic income’s implicit goals and would hardly ‘solve’ profound labour market dysfunction or even very drastically reduce poverty and inequality.

Despite these inevitable concessions, such schemes would still require politically difficult tax rises. Furthermore, if the issue is adjustment to new labour market conditions rather than a ‘post-work future’, it is not clear that basic income – or any form of compensatory welfare provision – would be the most appropriate solution. Other policies could be more politically viable given the large fiscal burdens that basic income entails. These include policies associated with the ‘social investment’ agenda, such as lifelong skills development policies, and policies aimed at generating high quality jobs. More generally, inequality between labour and capital would need to be tackled through a combination of measures aimed at the root causes: strengthening labour market institutions; regulating and taxing corporations more effectively; and democratising ownership of capital more generally.

Such efforts are not necessarily opposed to basic income, and indeed would arguably be more effective in combination with the latter. As most progressive advocates accept, basic income is not a ‘silver bullet’ (Haagh, 2019). It would still arguably be necessary to address labour market dysfunction and growing inequality in other ways even were a basic income to be established, and to retain much of the apparatus of existing welfare provisions. Advocates should continue to align themselves with broader progressive policy goals and counter narratives that basic income is a replacement for a comprehensive welfare state, strong labour market institutions, capacitating social services, and broader efforts to redistribute income and wealth. If public demand continues to grow, and advocates can coalesce behind modest and realistic proposals, then basic income could well be part of a broader package of measures to address forthcoming dynamics of labour market change.