The delinkage of productivity and real wages is the underlying cause of the economic crisis. As a result of this delinking, consumer income has lagged output GDP, and the gap has been funded by consumer credit and increased debt-financed welfare payments. This proved unsustainable, and so led to the coalition’s current austerity policy and GDP cuts. An alternative paradigm is needed in which the financial sector is re-engineered and financial instruments redefined to serve the real economy.

The debt crisis persists. In the US, the Eurozone, and the UK, politicians are implementing dire austerity packages in order to reduce government deficits. Greece and Italy may be in the worst position, but the phenomenon deeply affects the majority of developed economies.

How has this come about? The popular answer trotted out as the daily news mantra that governments have been reckless, bankers have been greedy, and consumers have been overspending, is too simplistic. The problem has deeper roots and causes, and will continue unabated unless these are better understood and addressed by policy.

Current talk is entirely monetarist. Economics is reduced to some sort of meta-accountancy. Keynes is derided by people who have never read him. Leading economics media commentators often have no formal economics training or degrees. Economics degrees themselves have often been restyled as ‘economics, finance and business’ degrees. The British Chancellor of the Exchequer tells the nation that it ‘cannot afford’ economic activity, which has to be cut because we simply ‘don’t have the money’. But the real economy is about real resources of people, skills, infrastructure, technology, land. All of these are available.

Standing back for a moment, isn’t it curious that human societies allow the money that they themselves create as an artefact to serve the real economy, then allow it to dictate their real economic behaviour? The tail really is wagging the dog. In the present structure, governments must raise money from the bond markets, who insist on repayment at interest rates which these markets determine according to their own level of confidence. Thus society and its governments are entirely subject to the prescriptions of bond dealers and credit rating agency speculators, who have no remit or capability in social leadership and management. Curious again, that UK political comment which is so troubled about ‘handing sovereignty to Brussels’, and to non-elected technocrats, is entirely supine in handing far greater sovereignty to bond dealers and credit rating agencies. Standard and Poor’s, Moody’s, and Fitch are entirely unelected and lack any democratic accountability, and yet are allowed to sit in easy judgment on our total economies, and to determine their prospects and scope for action. We can thank Michel Barnier, the EC Internal Market Commissioner, for seeking to constrain them. He deserves our support.

We need a new paradigm in which we understand money and financial agencies as servants rather than as masters of the real economy. Money is virtual, not real. It does not obey the laws of thermodynamics : it can be created or destroyed. Commercial banks do this regularly. They operate lending ratios whereby they lend a multiple of the deposits lodged with them. Market economies ‘print money’ all the time in this way as a regular practice. A sustained total run on the banks would always cause them to collapse. The system is supported only by confidence. The only rule is that the amount of money in circulation has to be matched by real output, if its value is to be maintained. To allow monetary factors to determine policy for the real economy is like trying to drive a car by bending its speedometer needle.

So what alternative diagnostic of the ongoing debt crisis is available? A thought experiment might help. In an imaginary totally automated economy with no workers, there would be no wages, and therefore no effective monetised demand. Goods and services would therefore have to be allocated by government to consumers by some voucher or shareholder mechanism. As Bob Crow, the RMT union leader put it in his ‘Lunch with the Financial Times’ interview in March last year, ‘if you have robots build cars, how are robots going to buy them?’.

A more erudite version of the same concept comes from Professor Robert Solow, a distinguished emeritus professor at MIT and Nobel Economics Laureate, who points out that with burgeoning production from advanced technologies ‘the wage will absorb only a small fraction of all that output. The rest will be imputed to capital…the extreme case of this is the common scare about universal robots : labour is no longer needed at all. How will we then live? ….The ownership of capital will have to be democratised…(needing) some form of universal dividend…Not much thought has been given to this problem’ (in ‘Revisiting Keynes’ by Pecchi and Piga, MIT Press 2010, p92).

In this scenario, the total voucher spend by the government would represent an unavoidable debt which would never be paid off. We are not there, but we have strong elements of this scenario in our modern technological economies. The delinking of productivity and real wages makes debt inevitable.

A general diagnostic for technologically advanced economies then emerges that whenever productivity exceeds real wages, and if the difference is not fed through to consumer demand via increased shareholder dividends or social transfer payments, then consumer demand will be insufficient to purchase output GDP. In this situation, which can and does occur, the shortfall in consumer demand can be made up by extended consumer credit and welfare payments, or output GDP can be cut in a recession. The diagnostic bears some resemblance to Marx’s and Keynes’s thinking on the implications for technology, automation and productivity on the economy, but should not be dismissed for this honourable association.

A recent history of the problem 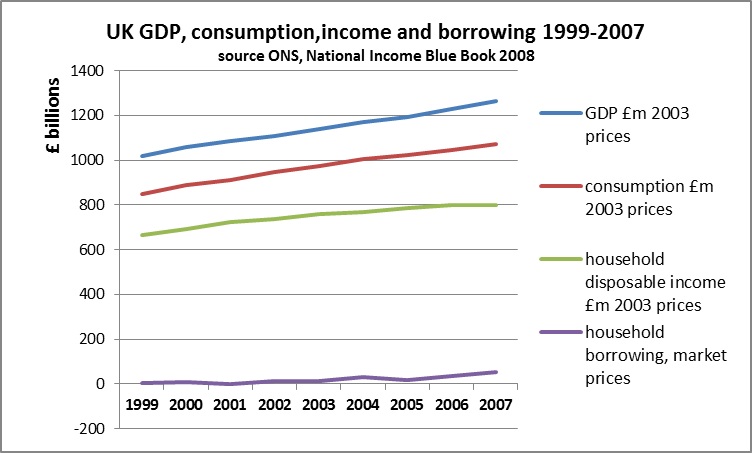 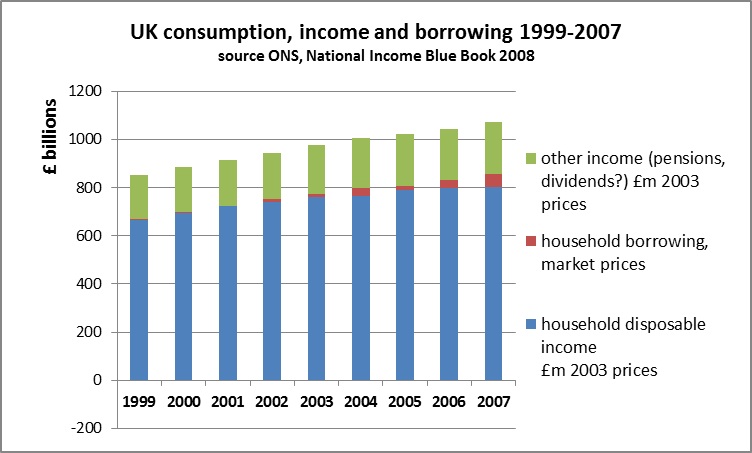 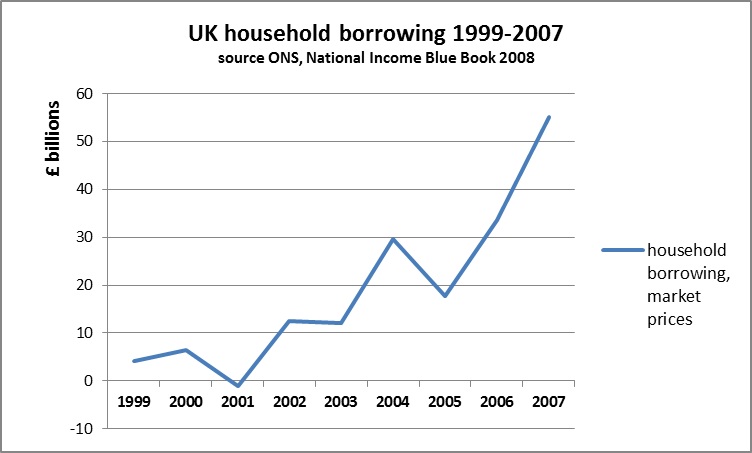 £55bn new consumer debt in 2007 became essential to fund the purchase of output GDP. Without it GDP would have fallen due to decreased effective demand, and employment, wages and income would then have fallen as a consequence.

The current system faces two alternative vicious circles, either that

1. increased productivity reduces the wage and household income element of GDP and this demand drop leads to a GDP recession

or 2. the demand gap is filled by increased consumer credit and government debt to fund welfare payments, which becomes un-repayable in the next period.

Neither is sustainable and leads to banks reducing consumer credit, and government cutting the real economy in the mistaken belief that this will eliminate its deficit. This is where we are now, and without a radical rethink, we will be chasing our tails for ever in the doomed attempt to write off deficits from an ever shrinking GDP. Those who call for increased government expenditure under a Plan B to raise GDP (which would have the effect of raising the tax take and reducing welfare payments and hence reducing the deficit) are derided by their critics who ask how it can be possible to incur debt to reduce debt. But the coalition’s Plan A insistence on cutting the economy to reduce the deficit has to explain how GDP can be increased by cutting GDP.

An alternative paradigm is needed to frame an alternative policy. There is nothing wrong with the real economy. Its factories, transport and communications infrastructure, skilled labour, restaurants etc. are all fully operational and highly efficient. There is also plenty of real demand for goods and services, especially globally from developing country consumers. It is purely the financial system which is disabling the real economy, and it is the financial sector which therefore urgently needs re-engineering.

It is commonly said that banks lent too much credit in 2007, firstly in the US sub-prime mortgage market, and then widely in the UK economy. But the above analysis shows that £55bn of bank lending was exactly the right amount needed to purchase GDP output, a claim which is substantiated by the lack of inflation in goods and services markets both then and throughout the NICE decade. It is true that asset prices inflated, but this resulted from any credit beyond that £55bn. The £55bn consumer credit matched against GDP output was non-inflationary.

Productivity growth in excess of real wage growth, and the gap between consumer income and GDP output that this produces, has distributive consequences. Between social groups, it tends to disfavour the poor, who rely more on the wage element of income, who suffer the loss of low-skilled employment when automation displaces labour, and whose access to credit as a replacement for wages is weak. Welfare payments are their only recourse. Surprisingly, the Institute of Fiscal Studies report ‘Poverty and Inequality in the UK: 2011’ shows that increased welfare payments did overcome income disadvantage. According to the IFS study, child poverty at 20% is now the lowest since 1985, and pensioner poverty is currently lower than at any point in the last 50 years.

The sectoral distribution of GDP is also affected by automation. Manufacturing employment and real wages per unit of output will fall, and much of this employment is transferred to low wage service sectors of the economy, only some of which, like banking, are subject to automation and productivity improvement. From anecdotal evidence, increased low productivity, low-wage service sector employment has absorbed employment reduction in more automated manufacturing sectors, and masked the effect of productivity in reducing aggregate real wages. Population growth is another factor masking the demand deficiency resulting from the delinkage of productivity and real wages.

We could of course take the view that reduced consumption is exactly what we want as part of a new ascetic paradigm to conserve world resources. Competition for natural resources from China and India may well force this choice on us anyway. But if we do pursue this option, income redistribution to those newly unemployed through productivity gains unmatched by new demand will be an essential part of the paradigm. Some form of welfare payment which does not add to government debt would be needed.

If it is accepted that the delinkage of productivity and real wages will make an element of debt financing inevitable, then a possible way forwards is a non-repayable financial instrument, a universal credit. This would have to be non-repayable at both consumer and government level. Proposals for a citizen’s income are longstanding. Such an income would not be repayable by the consumer and could be financed without incurring government debt. This could be done by creating a public sector bank with a government deposit, and a lending ratio set to exactly meet the shortfall between output GDP made possible by increased productivity, and flat or declining real wages. If the £55bn incurred as consumer credit in 2007 had instead been funded in this way then the economy would not face the crisis that it faces today. We have to think outside the box. Calls for a plan B are stuck within the present paradigm. This new paradigm would re-engineer the financial sector and the management of inevitable debt. It would release the real economy from artificial financial constraint, and deliver sound finances built on productivity advances. It would also greatly enhance social cohesion.

Geoff Crocker is an industry strategy consultant and is author of A Managerial Philosophy of Technology (Palgrave Macmillan, 2012)