Reason of the Day

A Citizen’s Income would experience an easy transition

It is not enough to recommend a new tax and benefits system. We also need to know how to get from where we are now to the system that we wish to arrive at.

This is not to say that transition must be easy; it must simply be possible, and not too difficult. In the UK, the transition from domestic rates to the Community Charge, and then to Council Tax, has been managed by local authorities – although the new localised Council Tax Support is not having an easy transition. It might eventually be possible to manage the transition to Universal Credit if it is taken slowly enough.

One way to implement a Citizen’s Income would be to start paying it overnight, and to reduce tax allowances and benefits at the same time. Obviously there would need to be planning to ensure that every individual had a bank account, and that all other benefits were recalculated from the chosen date, but none of this would be difficult. The transition would be even easier if, instead of implementing a Citizen’s Income for everyone at the same time, Citizen’s Incomes were to be implemented for different age groups one after the other. We could create out of the new Single Tier State Pension a Citizen’s Pension, starting with the very elderly and slowly reducing the age at which it was received; or we could start with a Citizen’s Income for every 17-year-old and then let them keep it, so that after fifty years every adult would have a Citizen’s Income. The easiest combination for implementation would probably be: 1) one age group at a time, and 2) leaving means-tested benefits in place and taking Citizen’s Incomes into account when they are calculated in the same way as other income is taken into account. More research is required here, but because we can already describe at least one method by which we could implement a Citizen’s Income, we can continue to discuss the idea and to hope that it will happen.

Sign up on the right hand side of this page to join our newsletter.

Order the book from the publisher. All royalties from the sale of the book go to support the Citizen’s Income Trust. 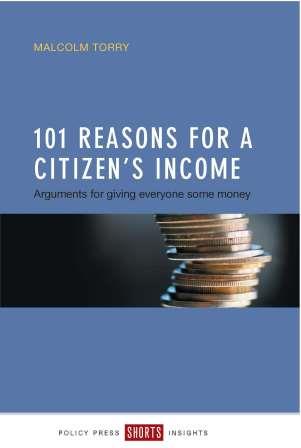