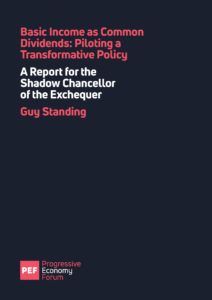 The Progressive Economy Forum has published a report by Guy Standing, Basic Income as Common Dividends: Piloting a transformative policy: A report for the Shadow Chancellor of the Exchequer.

This report, requested as a contribution to policy development by the Shadow Chancellor of the Exchequer, begins by defining a basic income, then considers the unique combination of pressures that make it almost imperative for any progressive or ecologically principled government to wish to implement it. The report recognises that a system with a basic income at its base would represent a principled reversal of the trend towards means-testing, behaviour-testing and sanctions that has evolved into Universal Credit. Accordingly, it includes a critique of that alternative, along with a critique of similar directions taken with regard to disability benefits.

It continues by briefly considering the main objections that have been made to basic income, and then turns to the main objective of the report, namely the proposal for the next government to implement a series of pilots, or experiments, to determine if a basic income would have the anticipated beneficial effects, if it would have any negative effects, what would make a basic income function optimally, and what indirect effects could be anticipated if implemented nationally. Undertaking pilots
would not necessarily commit the government to rolling out a basic income system, but would inform public debate on its potential, the feedback effects and the likely economic and social implications.

To be clear from the outset, this report advocates a strategy with the following features:

1. It would reduce poverty and inequality substantially and sustainably.
2. It would make nobody in the bottom half of the income distribution system worse off.
3. It would enhance economic security across the country.
4. It would not involve any dramatic increase in income taxation.
5. It would not involve any dismantling of public social services, and would be compatible with a strategy to achieve public service regeneration, desperately needed in the wake of the savage austerity era.
6. It would reduce the number of people dependent on, and subject to, meanstesting and behaviour-testing.
7. It would contribute positively to the urgent fight against ecological decay. (pp. 6-7)

To hear Guy Standing talk about his report on the BBC’s Today programme, click here, and start to listen 15 minutes into the programme.

The BBC also has a page about the report on its website: click here to read it.

To read an article in The Guardian, click here.